If you’re looking for a low-carb pizza option then this Vegan Cauliflower Pizza Crust recipe is worth the rave. It’s also gluten-free. This pizza is topped with classic Margherita pizza toppings, a homemade pizza sauce and slices just like your typical pizza.

What is Cauliflower Pizza Crust?

Cauliflower Pizza Crust is made primarily with cauliflower and it’s a great alternative to flour-based pizza crust. You would typically find cauliflower pizza crust made with eggs to help bind the dough and topped with dairy cheeses. But this recipe is all vegan! Yes, that’s right. No meat, no dairy and no eggs.

It is also gluten-free for those of you who are gluten intolerant or just choose to lessen your gluten intake.

If you’ve made your own cauliflower pizza crust before but struggled to keep it from falling apart, then this recipe is the answer to your struggle. This cauliflower crust is sliceable like a regular pizza crust with a nice chewy texture to match.

The next thing that makes this recipe so special is that it is topped with a homemade pizza sauce that comes together in under 30 minutes.

I then top it with Margherita pizza toppings like freshly sliced tomatoes, vegan mozzarella cheese and fresh basil.

How to Make the Best Cauliflower Pizza Crust

It’s no doubt that pizza is enjoyed by pretty much everyone. I mean, it has all of the ingredients that scream comfort – gluten, cheese and meat if you choose – and is handheld for easy on-the-go eating. Although this Cauliflower Pizza Crust is vegan and gluten-free, it still rivals your favorite non-vegan version.

The best pizza in my opinion is one that has the perfect ratio of crust to sauce to toppings. This pizza recipe yields a thin, crispy crust that is slightly chewy and delicately seasoned.

The crust holds together beautifully at the end so you can pick it up and enjoy it as you would a normal slice of pizza.

The homemade pizza sauce is divine and really mimics that at your local pizza shop. The best part about the sauce is that it comes together in no time with simple ingredients.

Once you have pulsed your cauliflower into fine pieces, boil it for 5 minutes then squeeze as much water out as possible. Do not skip this step at all since this plays a crucial role in getting a crust that holds together in the end.

Combine the gluten-free flour, seasonings and flax egg (binder) and use your hands to create a the dough. I recommend a squeezing motion as opposed to the typical folding motion when creating the dough. Keep in mind, the dough will be sticky to the touch so don’t worry about adding anymore flour.

Once the dough comes together, spread it out evenly on a parchment-lined pizza tray or baking tray. You can wet your fingertips lightly to help you with this step since the dough is sticky.

Next, pre-bake the dough until the edges are nice and golden. This step is necessary before topping and prevents you from getting a soggy crust at the end.

Top with your favorite toppings and bake again for a final 8 minutes then serve.

Flax Egg – A simple combination of ground flaxseed and warm or hot water makes a great egg replacement. If you don’t have flaxseed feel free to use chia seeds or your favorite vegan egg replacement that equals one egg.

Gluten-free Flour – I recommend using a gluten-free flour blend like this one,  as opposed to mixing several different gluten-free flours. However, you can also use unbleached all-purpose flour or whole wheat flour at the same amount.

Oregano – Oregano is a huge part of pizza making so this herb really shouldn’t be substituted unless you’re replacing dried with fresh. But if you absolutely have no choice then try some thyme or basil – dried or fresh will work.

Toppings – Top your pizza with any veggies and ingredients of your choice. Pre-cook any raw toppings like mushrooms or bell peppers before adding them to the crust.

How to Store Homemade Pizza Sauce

This sauce recipe makes enough for at least three pizzas. So if you are doubling the cauliflower pizza crust, then you don’t need to make any additional sauce because there will be plenty.

Leftover pizza sauce can also be stored in an airtight container in the fridge where it will keep fresh for up to 1 week. Or you can freeze it for up to 2-3 months. You can also use this pizza sauce on pasta!

How to Stop Cauliflower Pizza Crust From Falling Apart

Making a cauliflower pizza crust completely vegan and gluten-free can be a challenge. The biggest struggle that most people have is ensuring that the cauliflower crust doesn’t fall apart once it’s finished baking.

Tip 1. Remove Moisture From the Cauliflower

The key to making a cauliflower crust that holds up during and after baking, is to ensure that the cauliflower is dry enough.

Cauliflower tends to yield a lot of water and this moisture is what causes the final crust to be soggy. Ensure that you squeeze out as much water – about ½ cup from one head of cauliflower – as possible before adding any other ingredients.

As per the instructions, you do this with the cooked cauliflower rice by straining it through a cheesecloth or clean kitchen towel.

Tips 2. Use a Binder Such as Flax Egg

The next tip is to use a binder of some sort. Since this is a vegan recipe there is no need for any animal products, so I didn’t use any eggs. As a substitute for eggs, I made a “flax egg”.

This is essentially mixing 1 part ground flaxseed with 3 parts warm or hot water then setting it aside allowing it to “gel” up. This “gel” is then used as a replacement for eggs in most recipes such as this cauliflower pizza crust.

The flax egg acts as a great binder while adding some much-needed fiber and protein.

My next tip is to pre-bake your cauliflower crust before topping it with anything. This is an important step and really helps to keep the crust stable at the end.

Be sure to roll your crust thin and even. That way it bakes evenly and at the same time.

My last and final tip is to top your crust with a small amount of sauce. Too much sauce will also cause it to get mushy when it bakes the final time.

Equipment Used For This Recipe 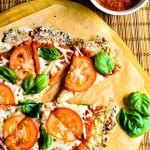 You might not have a green thumb yet, but that’s all about to change! Imagine heading out to your garden and picking fresh basil leaves to add to your pasta sauce tonight? Or growing your own tomatoes and lettuce to make a salad to go with your pasta dish?

Well, that’s exactly what got me excited about growing my own food. Hi, I’m Jo, a backyard gardener who grows food. And you can too with just a few tips here, so let’s get started!

Get Our FREE Top 5 Essential Tips For Successful Edible Gardening!

How to Start a Vegetable Garden: A Beginners Guide

This site is owned and operated by AJH Trade Group. AJH Trade Group is a participant in the Amazon Services LLC Associates Program. As an Amazon Associate we earn from qualifying purchases.

AJH Trade Group also participate in other affiliate programs. If you use our referring links, it costs you nothing extra. We may earn a small commission.